Illegal dumping of smaller quantities of asbestos waste in nature has become a rather frequent doing. Due to health reasons we should prevent further unleashing of asbestos fibres into the air, as exposure to asbestos and the inhalation of asbestos fibres represents a danger to the population's health, as it causes mainly breathing problems. In order to eliminate potential dangers for the environment and for the preservation of the population's health, we, in the studied ten separate areas of the City Municipality of Ljubljana, which are mainly owned by the Municipality, made a register of illegally dumped waste, with the special attention made to those waste, containing asbestos. Each registered waste dump was noted and categorized within the interactive database of waste dumps. In the studied areas we noted down 282 illegal waste dumps, with 119 of them containing asbestos waste. Their common surface amounts to 17.214 m2, common volume to 15746,0 m3 and the volume of asbestos waste to 3434,0 m3. The average waste dump has the surface of  60,6 m2 and contains 53,7 m3 of waste, from which 12,2 m3 contain asbestos. Asbestos waste can be found in eight studied areas, from which two areas contain waste, within which the percentage of asbestos surpasses twenty per cent of all the waste of that area. 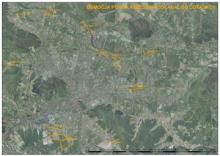 Areas of made registers of asbestos waste. (figure in high resolution) 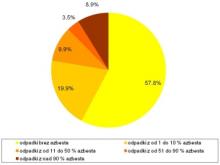 The waste structure regarding asbestos waste. (figure in high resolution) 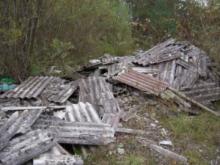 Only rarely were such waste dumps homogeneous with asbestos noted.